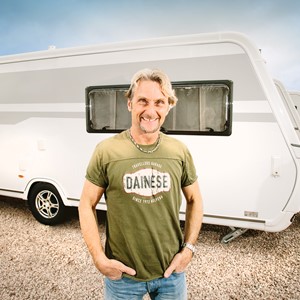 World Superbike star and winner of TV show I’m a Celebrity… Get Me Out of Here, Carl Fogarty is supporting Freedom To Go as an ambassador! Throu...

Fresh from the jungle, Freedom To Go ambassador Carl Fogarty takes us on his relaxing holiday to Anglesey...

The thing I like most about camping, caravanning or motorhoming is how good you feel just for getting out in the fresh air. You don’t have to do much, just a walk down the beach with the dogs is enough to feel the benefit.

We had a really good time in Anglesey in the Airstream. The weather wasn’t great every day, but we’re used to that in the UK. If it’s raining, you just put a coat on or put the awning up - you don’t let it stop you having fun!

We borrowed a top-spec Airstream International 684 trailer from the guys at Airstream and Co in Cumbrian and towed it across to the White Lodge campsite, a secluded spot in Newborough on Anglesey. It’s a nice little spot behind the Marram Grass restaurant; which looks like a bit of a shed, but actually serves really good food.

While I’ve got more experience of driving motorhomes (I had a few when I was racing) I found the Airstream easy to rig up and manoeuvre. Word of warning though – make sure your plugs to the lights are in the right way round! When we first did it, we had the indicators flashing on opposite sides!

I’ll admit I cheated a bit when we got to the site because we’d managed to borrow a caravan maneuverer. I felt like a kid with a remote control car! It was a clever piece of kit that helped us to get the trailer in the right position. We were lucky because there was only one other caravan on the site so there was plenty of room, but I bet they’re particularly useful when you need to get into a tight space.

Once the caravan was set up, it was time to relax. With so much going on since coming out of the jungle, it’s great to just sit with a brew or a beer and do nothing. The dogs – Beano and Desmo – had a run about while we had a barbecue for tea.

After a comfy night’s sleep in the Airstream, we went for a walk about Newborough Forest then down to the beach. The beauty of being in a caravan is that you’ve got your car if you want to go a bit further afield, so later on we drove out for some tea. It was still light when we got back so had a couple of beers under the awning then went to sleep. All that fresh air (and massive portions of food) properly knocked us out so we opted for an early night.

On the third day we went for a bike ride and stopped at a really nice pub for some lunch and locally brewed ale. Not too much though, can’t be drunk in charge of a bicycle! We took an even more scenic route back that looked over the Caernarfon and mount Snowdon. With a view like that, you can forget that you’re only a couple of hours away from home and not in the Alps or somewhere like that.

Setting up to come home was dead easy and we got back over to Cumbria in good time. The Airstream was a really quality piece of kit and a comfortable home from home and I can see why they’re so popular.

All in all we had a great break and really enjoyed the beautiful scenery, fresh air and the freedom to do nowt!

Throughout 2015 Foggy will be blogging at freedomtogo.co.uk and showing you how easy it is to get going in one – you don’t have to be superbike racer!

Freedom To Go is also backed by a host of sports personalities including British racing driver Oli Webb and rising surf star Melodie King who, like Carl Fogarty, are passionate about leisure vehicles as enablers to an active lifestyle in the great outdoors.

Want to go on your own adventure? Find a rental here 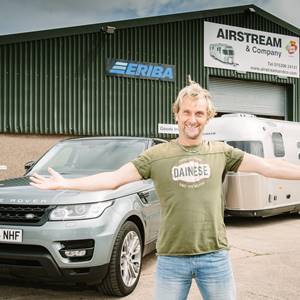 Home comforts and simple joys: the future of caravanning

Top things to see and do in England